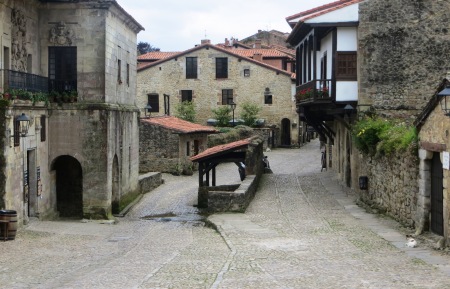 Having visited Santillana del Mar once before, we were fairly confident of the directions and we arrived in the town and made our way to the free car park at the edge of the medieval centre. This place is overwhelmed by visitors in peak season and is entirely pedestrianised but it was quiet today and the summer restrictions didn’t appear to apply quite so rigidly but even so I wasn’t prepared to risk a fine so we then carried on by foot into the labyrinth of streets into the centre.

Santillana del Mar is a most picturesque town and often appears in any top ten of best villages in Spain along with Cudillero, Almagro, Ronda, Trujillo and Alcala de Henares.  This may of course have something to do with the fact that the French writer, philosopher and all-round clever dick, Jean Paul Sartre declared it to be the prettiest village in Spain in 1938, although I am not absolutely sure just how much of Spain he visited and just what he was comparing it with or how he came to this rather sweeping judgement.  Perhaps it was just a lucky guess!

Actually, I might be inclined to agree with him because the route to our hotel took us along uneven cobbled streets past yellow stone buildings with terracotta pantile roofs, stone walls, hidden gardens and tempting twisting alleys.  I may have been inclined to follow them but Kim wasn’t because, and I have to agree with her, it was a bit of a chore dragging our luggage over the bumpy surface and it made sense to go directly to our accommodation.

The Hotel Altimira was a delightful old seventeenth century grand house with stone walls, wooden floors and creaky rustic furniture and, unlike in Burgos, we were allocated a room at the front with a stone balcony and iron balustrade which allowed excellent views in both directions along the main street. 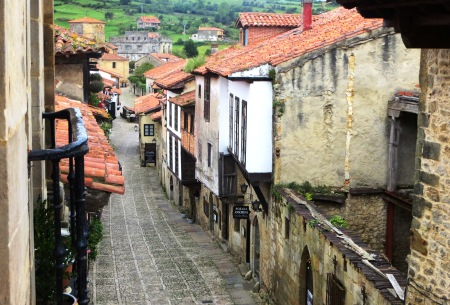 It was mid to late afternoon and we were both rather hungry so we went straight away to a restaurant that we had used previously, the Castilla, selected some tapas dishes and waited for service – and waited and waited and waited!  I realise that it was the end of the lunch time shift and the staff were looking forward to a short break but these guys were really rude and showed no enthusiasm to serve us.  As a result we abandoned the idea of food and a single drink and moved on.

Santillana is not an especially large town and there are only a couple of streets running from top to bottom so we walked slowly to the bottom of the town past half timbered houses and stone colonnades and to the well at the very bottom outside the Church of the Colegiata with its crumbling stone facade and slightly neglected appearance.  There is apparently an old saying that Santillana del Mar is The Town of Three Lies, since it is neither a Saint (Santo), nor flat (llana) and has no sea (Mar) as implied by the town’s name. However, the name actually derives from Santa Juliana (or Santa Illana) whose remains are in the kept in the Colegiata, a Romanesque church and former Benedictine monastery.

From the outside the church is a Romanesque masterpiece, squat but elegant, grey but welcoming, informal but grand, austere but inviting with weathered sandsone walls and sinewy arcades where it is easy to imagine merchants conducting business before worship

We had visited the church on our last visit and as there was an entrance fee we declined the opportunity for a return and walked instead around the back and towards the edge of the town past more grand villas, grand wooden doors and weathered stone statues and when we had reached the very edge of the town we walked back along a road that ran parallel and returned us to the Plaza Mayor and the small town museum which we visited largely on account of the fact that there was free admission.

Finding a shop was the next priority and this was quite difficult.  I was beginning to despair that we wouldn’t find one but eventually we came across a mini-market just outside the town centre and took possession of a bottle of red wine and some San Miguel and with essential supplies secured returned to the room.

An hour or so later as we were preparing to go out for dinner there was suddenly a lot of happy music from somewhere outside and it was clear that it was getting closer.  From our balcony we could see a gathering of people and a fun band of musicians in blow up suits advancing along the street and right underneath our window.  I have no idea what it was all about but the music was nice and the children all seemed to be enjoying the festival atmosphere.

There was now a debate about evening meal and whether or not we should return to the Castilla but we eventually decided to forgive them for their bad manners earlier in the afternoon and we returned for dinner and we were glad that we did because the food was excellent, the service first class and the atmosphere perfect.

As it turned out the room on the front of the Hotel Altimira was rather noisy on account of looking out over the street and the wooden floorboards which creaked every time someone in the hotel turned over in bed but it didn’t matter at all, it was a charming place and we were glad to be there.

Next morning the weather was disappointing again and it reminded me of childhood holidays to Wales or Norfolk – grey skies and anoraks.  Kim upset the breakfast staff over the issue of hot water that wasn’t hot – in Spain there is a general failure to understand how important this is to a proper cup of tea and so after the meal and with a promise of better weather to the west we checked out of the hotel and began our final drive along the Cantabrian coast and back to Asturias airport. 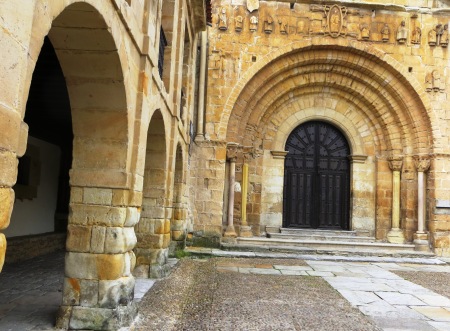