“It gave me vertigo to imagine what it must be like living up there , a permanent aviator above the trees”   Ted Walker – ‘In Spain’

From Belmonte to Cuenca was a distance of about ninety kilometres and after half way the landscape began to change and we left behind the patchwork of fields and farmland and as we started to climb through hills it became more dramatic with steep sided hills and pine forests and busy rivers dashing madly through narrow gorges.

The previously straight road ran into concertina like bends and driving required greater attention to be paid the road.  Eventually it stopped climbing and the landscape flattened and we made our final approach into Cuenca.  At first this wasn’t especially promising, Cuenca is a big city and capital of the fifth largest province in Spain and to reach the old town it was necessary to drive through the modern city, which wasn’t especially notable or exciting.

Emerging on the other side we found a parking spot next to the river with surprising ease.  The city was built here because the rocky outcrop of land lies between two deep river gorges, the Júcar and the Huécar and it made an excellent location for a defendable fortress.

At a little over five hundred kilometres the Júcar is a big river but it was not especially lively today and we followed a man in a sombrero along the path next to the lethargic oozy green water that slipped lazily by until we came to steep steps that took us away from the river and up towards the old city, through a crumbling arch and into the main street to the top.  On the way we passed some brightly coloured tall buildings just before a narrow archway in the road underneath the town hall that led into the Plaza Mayor.

In the Plaza there were more gaily coloured houses, shops and pavement cafés and bars and the city’s Cathedral that was completed in the thirteenth century but partly fell down in 1902 and over a hundred years later the rebuilding of the façade still remains to be fully completed and remains a curious melange of architectural styles, from Anglo-Norman to Iberian Gothic.

It was time for refreshment but we pushed on to the top stopping on the way to climb the castle walls and to admire the scenery of the gorges stretching out seemingly endlessly on either side of the city.  Climbing even further we reached the top and there were vantage points of the city from elevated craggy rocks where people were walking out and taking as much risk as they dare just to get the perfect photograph.

Standing above the vast ravine that winds its way around Cuenca, I could see why the Spaniards used to call this the unconquerable city. This ancient citadel is perched on a steep rocky peak, high above the surrounding plain, and the treacherous gorge below encircles the city like a moat and this is the deepest moat you’ve ever seen, a giddy drop of several hundred feet, with nothing beneath you to break your fall.

From this position it was clear to see how the city had developed.  There was only limited space at the top of the rock so as it grew and it was unable to expand outwards the city went up instead and that explained the tall houses.  Even more dramatically it also went as far as it possibly could in making use of all available space and in the fifteenth century houses were built like Swallows’ nests with rooms and balconies partly and precariously overhanging the gorge above the Huécar River.  These are called the Las Casas Colgadas, the hanging houses, and are the most famous attraction in the city.

It was lunchtime and it was hot and it was time for a drink so we walked along a street of bars and found an empty one and selected a table in the sun.  I wondered if it was open but soon a man casually arrived to take our order and return with two beers and a plate of olives.  This was very sociable and was repeated in almost every bar we sat in all week and I swear that they were the sweetest tastiest olives that I have ever eaten anywhere.

Soon more customers arrived and there is something about the first customer that encourages more people in and within a few minutes the bar was completely full.  When we called for the bill I thought we might get a discount on account of drawing customers in but we didn’t and after we had sat and enjoyed the sun and watching a local family next door doing housework and do-it-yourself car repairs we returned through the narrow streets, passing by the now crowded Plaza and back to the car.

A drive along the river gorge didn’t seem to be going anywhere in particular so we returned to the city and being rather hungry by this time spotted a popular restaurant by the river and pulled in but then quickly rejected it and pulled out again when we saw the high prices on the menu.

So we returned to the city and this time drove to the top where we had previously walked and looked for a spot in a very crowded car park.  We had a Chevrolet Matiz, which is only a very small car so we squeezed it into an improbable spot and returned to the string of bars at the top of the ridge.  It was half past three and they were all overcrowded and doing brisk business and with no prospect of a seat there we had to walk back towards the town and discovered a place in full sun overlooking a rather splendid convent.  I was surprised that the town was so full but we learned later that today was Father’s day in Spain and all of the children were off school and out with their parents for the day.

We decided to have some tapas but the menu was giving nothing away in assisting with a selection of dishes we didn’t recognise and the waitress could give no explanation except in Spanish so we went for the ‘surprise me option’ and stabbed a nervous finger towards a couple of items on the menu and sat back in anticipation.

Although I dislike them intensely this was one of those occasions when it would have been useful to have one of those picture menu boards that give an indication to the sort of food that you think you are ordering.  When it arrived we had a chicken dish and a sort of mutton stew, which we probably wouldn’t have knowingly selected but it was tasty and filling and we ate it all and when we had finished we communicated to the waitress the best that we could that we had thoroughly enjoyed it in that polite sort of way that we do when we cannot speak the language.

It was late afternoon so we left Cuenca getting slightly lost in the tangle of streets on the way out and with no real alternative returned to Belmonte by the same route, first through the rugged hills and the winding road and then to the gentle rolling plains and the long straight road.  It was a relaxing and uneventful journey with very little traffic and along the route we saw shepherds herding their sheep and buzzards flying high in the sky on the thermals.

We called in to the town of Villaescusa de Haro next to Belmonte but it was all closed for the afternoon so we went back and returned to the little shop for alcohol.  To our shock and horror it was shut so we made a frantic search for another and found one just around the corner that was quite difficult to spot but given away by the town rough sleepers who sat outside drinking from litre cans of San Miguel.

Later we walked out again and even though this was Father’s day Belmonte was just as quiet as the night before but we found a nice bar in a hotel in the centre of town where we had drinks and olives before returning to the Palacio Buenavista Hospedestra for evening meal, a last drink in the bar and a second early night.  It had been a very good day indeed! 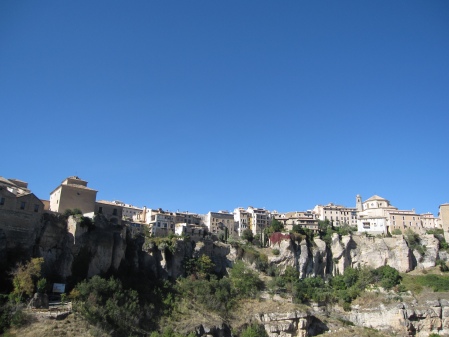 4 responses to “Cuenca, the Hanging Houses”