“Catholic among increasingly secular peers, isolationist in a gradually uniting Europe, tainted by its semi-fascist credentials, in Franco’s  last years  Spain was an enthralling prodigy among the powers.  dark, but sunny too, fascinating but forbidding, unique at once in its ancient glories and its twentieth century anomalies.”  Jan Morris – ‘Spain’

During the day there wasn’t a great deal to do except to visit the beaches and spend endless pointless hours sunbathing.  Benidorm is famous for its two main beaches which stretch for four kilometres all along the bay.  The city enjoys a unique geographical position on the east coast of Spain because it actually faces due south and has two stunningly beautiful beaches on the Mediterranean Sea that stretch out either side of the old town, on the east the Levante, the sunrise, and to the west the Poniente, the sunset, and it enjoys glorious sunshine all day long.

Even though the Blue Flag award wasn’t initiated until 1987 the beaches really were excellent with soft golden sand and a gentle shelf leading down into the warm sea.  Since its introduction Benidorm had prided itself on the award and the quality of its beaches but then in 2009 there was a calamity and although the Poniente and Mal Pas were confirmed the Levante was removed from the list.

The news of the loss of the blue flag status, previously considered to have some of the best sand in the world, was a bombshell for Benidorm.  The town council, which is in charge of the beaches complained that the decision was unfair because the analysis took place after there had been a lot of rain which had caused turbulence in the water but the blue flag organisation couldn’t be persuaded.  The authorities are determined to rectify this and the beach is almost certain to be reinstated to blue flag status in 2010. 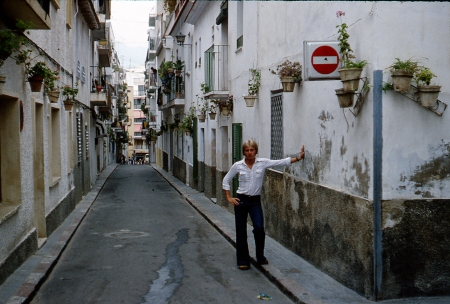 Behind the beaches were the wide Promenades, the palm fringed backdrop to the golden sand with flowing patterned tiles that provided a route for the inevitable tourist train (I really hate those tourist trains) and a thoroughfare from one end of the beach to the other with all of the sidestreets leading to hotels and tucked away bars.

Benidorm has a unique urban pattern because in 1954, the Mayor, Pedro Zaragoza Orts created the Plan General de Ordenación, or city building plan to you and me, that ensured that every building would have an area of leisure land, guaranteeing a future free of the excesses of cramped construction seen in other areas of Spain and it is the only city in the country that still adheres to this rigid rule.  This vision for the future sparked the building boom that followed and the flying start that Benidorm achieved in the package tour boom of the 1960’s and 70s.

In between the two magnificent beaches was the old town and this really was the best part of Benidorm.  Here in the twisting narrow streets hemmed in by claustrophobic whitewashed buildings it was possible to imagine what the town must have been like in the past as small fishing village as we walked around the old town, the San Jaime church with its distinctive blue tiled hat roofs, the old town promontory with the Balcon Del Mediterraneo, and pretty Mal Pas beach below situated in between the Levante and the Poniente.

Benidorm castle was thought to have been built on this rock around 1325.  The castle survived until 1812, but now there are no signs of the ruins.  Inland from the promontory Benidorm’s old town narrow streets were a joy to wander around, vibrant and continuously busy they were dotted with bars, restaurants and tourist shops that never seemed to close.

There was only so much time that we could spend on the beach and walking around the old town, there was the Wednesday market that we visited (twice)  but to be honest there wasn’t a great deal more to do so filling fourteen days was a bit of a challenge.  About three kilometres out in the bay was the little island of Isla Benidorm, a triangular shaped wedge of inhospitable rock with a regular bright red ferry boat called the Bahia de Benidorm running across for just a few pesetas each.

There was so little to do that we made the trip twice and really once would have been quite enough.  It was advertised as ‘Peacock Island’ but all we found there were a few scraggy chickens trying to get by in a very hostile landscape without any vegetation or water.  Fortunately there was a bar on the island with really good views back towards the mainland so at least there was somewhere to sit and have a drink while we waited for the ferry to return.  On one of the trips we met Tanya and Steve from Blackpool and we shared a table, struck up conversation and agreed to meet up one evening for a meal.  Today Isla Benidorm is being developed as a wild bird sanctuary so maybe there are a few more species there than those few pathetic chickens? 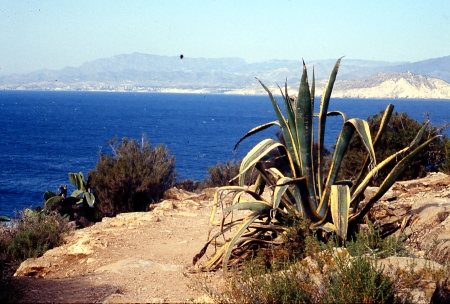 Other posts about Benidorm:

Benidorm, The War of the Bikini

Thanks to http://www.realbenidorm.net/ for the use of the postcard image