A few years ago when I was still working I was visited one day by two members of the Spalding Naval Veterans Association who offered the donation of a six foot model of the British Naval submarine H.M.S. ‘Taku’ which really meant nothing to me until I looked into it and discovered a story of community, bravery and achievement.

During the Second World War, the Royal Navy lost two hundred and fifty-four major warships in addition to over a thousand minor vessels and auxiliaries due to enemy action and to counter these losses a huge shipbuilding programme was begun.  The enormous expense involved forced the Government to appeal to the British people to assist in meeting the bill and weeks were set aside during which local communities were encouraged to save to adopt locally a warship.

The weeks were organised by the National War Savings Committee and there were over one thousand ‘Warship Weeks’ organised during the campaign, involving 1,273 local authority districts.  The campaigns encouraged civilians to save their money in Government accounts, such as War Bonds, Savings Bonds, Defence Bonds and Savings Certificates. Each Council set its own target appropriate to the size and wealth of its population.  A small village for example might be able to sponsor something small such as a motor launch whereas a large city could aspire to reach the two million pounds that was required to buy a major battleship.  The national campaign raised £955,611,589 for the war effort and resulted in the adoption of 8 battleships, 4 aircraft carriers, 49 cruisers, 301 destroyers, 25 submarines, 164 corvettes and frigates and 288 minesweepers. 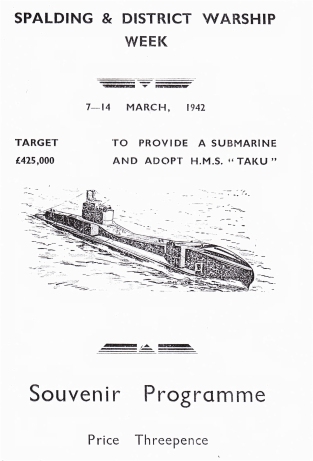 Other national war campaigns were a ‘Wings For Victory’ Week to buy bomber planes, a ‘Spitfire Week’, a ‘War Weapons Week’ and a ‘Tanks For Attack’ Week. The purpose of all these campaigns was to finance the building of ships, tanks or aeroplanes that would then ‘belong‘ to the particular locality where the funding to build it had come from.

Communities that successfully raised the money required to construct a ship were able to ‘adopt’ a warship, receiving a shield from the Admiralty in recognition and often, in return, presenting ‘their ship’ with a commemorative plaque of their own.  In Spalding, the Urban District Council and the Rural District Council decided in October 1941 to hold a Warship Week in March 1942, and a target was set at £425,000 to adopt a submarine.

For two relatively small local authorities and a population of under thirty-five thousand people this must have been hugely ambitious especially when many similar size councils went instead for the much cheaper ‘buy a Spitfire’ option at only £12,000.

‘Warship Week’ was set for the 7th to the 14th March 1942 using the slogan “MAKE THE WEEK A SUCCESS BY LENDING MORE AND SPENDING LESS”.   Parades and exhibitions as well as fund raising events were held in Spalding and in all of the villages and at the end of the week, the total reached was £383,151, which averaged £10.18s.0d (£10.90) per head of population.   To raise this considerable amount of money was a monumental task and to put it into perspective, at today’s values this would be the equivalent of raising twelve million pounds in one week.

This effort was enough to fund the construction of a new submarine and because of this fantastic achievement Spalding & District adopted H.M. Submarine ‘Taku’, a ‘T’ Class, Patrol Type Submarine.  The ‘Taku’ was already in service and had been constructed by Cammell Laird of Birkenhead and had been launched on 20th May 1939 and completed on 5th January 1940 and had cost at that time around about £350,000.  The Royal Navy’s T class of submarines was designed in the 1930s and approved in 1936.  The prototype was called ‘Triton’ and completed in December 1938 and in total fifty-three ‘T’ class submarines were built just before and during the war.

This is rather obvious but all ‘T’ class submarines had a name that started with the letter T.  ‘TAKU’ was a Chinese fort situated in Tientsin Province, a strongly fortified spot guarding the approach to Tientsin and Peking that had been captured by British and French fleets in 1860 and again by allied troops during the Boxer uprising of June 1900.

In June 1942, some of the crew visited Spalding and stayed with local families.  Led by the Royal Marine Band they marched from the Grammar School to the Market Place and at a ceremony that followed Rear Admiral Buckley and Lt. P C A Day who was the 2nd in command of H.M.S. ‘TAKU’ exchanged plaques with the Spalding Urban and District Councils.  The submarine’s Jolly Roger flew from the Corn Exchange, which is now the South Holland Centre.  Dances and other entertainment were put on in Spalding and surrounding villages because, as the presentation took place during “Wings Week”, many servicemen were in town for the party.

Seventeen of the fifty-three submarines were lost to enemy action but the ‘Taku’ was a very successful boat that managed to see out the entire war.  She sank 32,473 tonnes of enemy shipping plus an unconfirmed 10,000 tonne tanker and many small craft.  Until the end of 1940, she spent time patrolling off the coast of Norway and in January 1941, she went on patrol in the Bay of Biscay.  In February, she was damaged by heavy seas in the Atlantic on the way to Canada and had to be towed back to the Clyde for repairs but by April she was in the Mediterranean sinking a number of merchant ships and auxiliary vessels.  Returning to the Mediterranean in May 1942 she carried out twenty patrols, attacking and sinking enemy shipping and was part of ‘Operation Vigorous’, which was an attempt to re-supply Malta from Alexandria.  On 16th December 1942 in the Doro Channel, she was attacked by patrol craft and was kept under water for thirty-six hours before successfully making an escape.   This would have been an especially unpleasant experience for the crew who were forced to breathe stale rancid air for all of that period.

On 20th December, she successfully landed three Greek agents on a special mission and then went on to bombard Port Kurn hitting some small ships and warehouses.    She arrived in Beirut on 1 January 1943 and then went on to Malta to join the 10th Submarine Flotilla but developed engine defects so had to return to the UK.  In June 1943, she returned to Southern Norway and the Skagerrak but on 13th April 1944, just before eight o’clock, she was rocked by an explosion, which put out all lights and sprang several leaks.  She had run into a mine and had to abort her mission and return to harbour.  She could never return to full combat service because the explosion cracked the hull but she remained on active service until June 1945 and was sent to the breakers yard in 1946.